In PA systems there are usually one or few people talking and their voice is being played out via loudspeakers. Such systems exists in many public places like airports, trains, undergrounds, supermarkets etc.  If the microphone, that is used by the person who is talking, picks up the audio that is being played on the loudspeakers, a disturbing echo might appear. 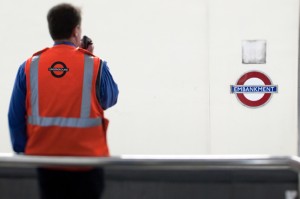 PA System in the London Underground

Cancelling this kind of echo is more challenging than cancelling echo during phone calls because of the following two major differences:

1. While during phone calls there are two distinct audio streams, PA systems have a single audio stream.

2. While phone calls contain limited areas of double talk (i.e. areas in which the voice is superimposed with the echo), PA systems contains mainly double-talk areas.

Regardless the above challenges, a professional AEC technology should be able and provide satisfactory results even in these tough conditions. Below are few guidelines for a successful integration and tuning of echo cancellation in PA systems.

When introducing an AEC in a PA system, the audio path should look like the following:

To achieve high quality results, make sure the AEC technology supports non-aggressive mode that will not harm the original voice while cancelling the echo. Using an aggressive mode in PA systems might be too risky.

The AEC should be equipped with technology to detect and respond to howling and similar artifacts that might appear due to the echo.

Last but not least, make sure that the AEC technology that you are using comes with an echo-system that helps you monitor and analyze important parameters like echo tail and convergence scores. Monitoring these parameters is a key factor to achieve high quality results.

[EDITED] For additional reading – view the post on echo in PA – additional-considerations.

Personal Noise Reduction - out of the box deployment